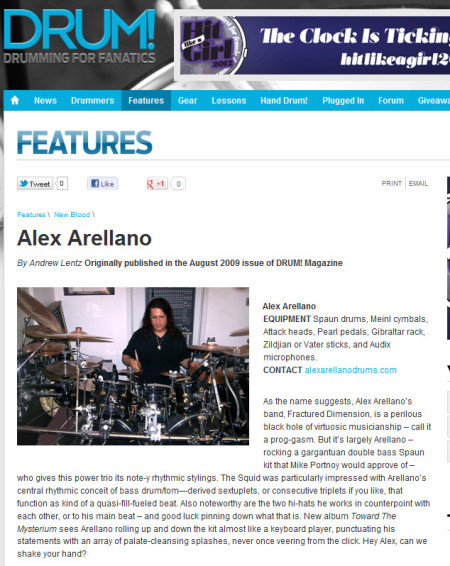 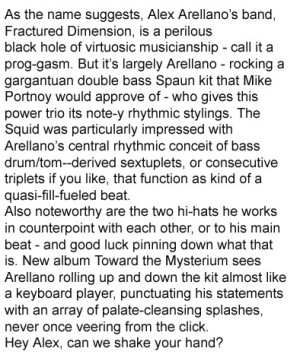 PILGRIM WORLD - Beware of this monstrous beat & technical chops fest! If you are looking for technical proficient prog metal band, please check out this U.S. group The Fractured Dimension."Arellano is definitely one of the most talented, intimidating, and monsterous drummer in the scene of prog metal/technical metal".

BABYBLAUE (Germany) - but especially Arellanos highly unusual percussion game again and again. Arellano has entirely his own style, that connects the Percussion work of a member of a symphony orchestra with Math-Metal-Drummers.

RAGAZZI -Frank Bender - Only four living drummers would have been able to play these constantly changing, often ostinato-based rhythms in such a creative and musical way: Joachim Fuchs-Charrier, Terry Bozzio, Chad Wackerman and Alex Arellano. Alex plays "lead drums" all the time similar to Rick Colaluca (WATCHTOWER). Furthermore he reminds me of Barriemore Barlow´s tasteful drumming on the JETHRO TULL song "Heavy Horses" - this track is exemplary for Barriemore´s playing in unison with the melodic instruments.

MIKHAL CALDWELL /Fusion Master - "This cat has the unique style award locked up. What an original artist. If anything he reminds me of early Carl Palmer with whole human drum machine vibe".

PROGNOSIS on "Towards The Mysterium" by TFD - "Alex Arellano who exhibited some monstrous chops & mesmerizing drum parts".

SEA OF TRANQUILITY/Scott Jessup-Alex Arellanao is a monster on the drums; he would have to be one of the busiest players ever captured on a recording. I haven't been this impressed with a drummer since Virgil Donati, Thomas Lang, Mike Mangini or Marco Minnemann with their amazing playing and incredible independence. Some drummers have what they call a bag of tricks, well, Alex has a shed full and then some, he is just so inventive and fluent with his drumming on Towards The Mysterium.

ULTIMATEMETAL.COM - Drummer Alex Arellano is a monster, he surely must have at least 8 arms.

PROGNOSIS on "eyes of the oracle" - Alex Arellano has a gifted flare for intricate cymbal work, as well as tasteful fills, he brings a ton of energy to the overall sound, relying on his unique coupling of cymbals, and toms to add to his precision footwork, he builds polyphonic rhythms that give the illusion of multiple players.

PROGNOSIS on "rooms of anguish" - Alex Arellano may be the best drummer you have never heard of, he playfully fills the musical voids with some of the most innovative percussive drumming anywhere, it is as if he were two persons, he follows the ever changing song structures with a dedicated time assurance, yet his hands are doing some of the most incredible cymbal work, and tom fills humanly possible, he is a special player.

PLEASE VISIT MY SITE AT