Terms such as melodic and contrapuntal are rarely to be found when describing a person's approach to the drums. With Alex Arellano's unique percussive concepts it becomes difficult not to use these words. While Alex has studied with such incredible musicians as Mark Zonder (Fates Warning) and Mark Craney (Jethro Tull, Jean-Luc Ponty, Gino Vanelli), in addition to graduating from M.I.(thanks to the constant support of his parents Alex & Rose), the method that he has developed is steeped in originality and exceptionally graceful technique. Over much of the past decade, Alex helped to create the progressive metal band Power Of Omens and record two albums: "Eyes Of The Oracle" and "Rooms Of Anguish", which saw international releases and acclamations. Alex left Power Of Omens in 2003 to pursue new stylistic challenges and further advancement of his drumming. Next he formed the Avant-Garde/Prog Metal band The Fractured Dimension which signed with Russian label MALS Records and released "Towards The Mysterium" to again; international acclaim.

Among Alex' most crowning musical achievements, aside from the aforementioned, are his appearances in Modern Drummer and DRUM! Magazine; performances not only in the USA but Mexico as well, studio work, including tracking jingles and rewarding partnerships with his endorsers: Spaun Drums, Audix mics, Meinl cymbals, and Attack heads. The compositional approach to drumming that is now intrinsically linked with Alex' style is increasingly prevalent in all his future work.

Keep your mind and ears open! 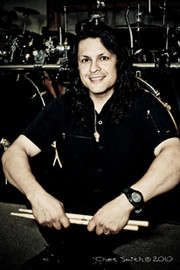 PLEASE VISIT MY SITE AT